Click below to see the Plugable storefront for your preferred e-tailer.

We also offer international sales to other regions through Amazon Global on Amazon.com as well as our eBay storefront.

Additional channels for resellers are:

At Plugable many of our engineers, myself included, are keyboard enthusiasts. What does that mean exactly? I’ll touch on that below… but first I’d like to introduce our two new mechanical keyboards, the Plugable USB-MECH87BW compact “tenkeyless” (no number pad) and USB-MECH104BW full size mechanical keyboards.

Traditionally a high quality mechanical keyboard retails at $100 or more. Because of this high cost of entry to the mechanical keyboard experience, many people choose to settle with an inexpensive standard generic mushy and lifeless rubber dome keyboard. There have been a few budget mechanical keyboards released over the past few years, but all of these contain at least one glaring compromise or omission that we as keyboard enthusiasts didn’t find acceptable. So we embarked on a mission to create a keyboard that was the best of both worlds, offering what we consider must-have features and build-quality with affordable pricing — a truly outstanding feature-to-price ratio.

Both keyboards are available for purchase immediately in North America and we recommend them without hesitation in any environment where the “clicky” switch noise won’t be a distraction to others. Keyboards can be purchased via the “Where to Buy” links on our product pages for the compact USB-MECH87BW and full-size USB-MECH104BW.

For those interested in our quest to develop the best possible budget mechanical keyboard including exciting information about switches, actuations, newtons, and attempting to define “keyboard enthusiast”, keep reading.

Now you’re probably still wondering what a keyboard enthusiast is, and to explain we have to rewind a bit. As a child growing up in the early 90s, my elementary school had just gotten in what seemed like hundreds of new Apple computers and they were giving out old systems to students whose parents couldn’t afford them. I started out with a Macintosh Plus for my first computer thanks to their generosity, and little did I know at the time, it came with a mechanical keyboard, an Apple M0110A. Ever since I have been interested in computers and technology and I’ve been working professionally in IT my entire adult life.

When I started working at Plugable three years ago I was handed down some equipment to get me started, and I distinctly remember hating the keyboard I was given to start with. It wasn’t that it typed any worse than your average keyboard, but it had an ISO layout for the UK that I just couldn’t get used to, I would always miss the vertical enter key and hit backslash instead. I went into the back storage room and rooted through some boxes and found a Solidtek ASK-6600C keyboard. It too didn’t have a standard layout, rather it had what is known as a “big-ass” enter key which is some blend of ISO and ANSI (US) layouts, but I figured I’d give it a try. I quickly found out that this was a mechanical keyboard with its heavy keys and intensely loud clicking but I didn’t know much more than that. What I did know is that I really, really liked typing on it, gigantic enter key and all.

After finding that Solidtek board I began to obsess over the history and technology behind keyboards. To me, mechanical keyboards are a fascinating subject, one that opens up an almost never-ending rabbit hole of obscure trivia. Most notably in 1985 IBM released their iconic Model M buckling spring mechanical keyboard. For the next 10 years mechanical keyboards were the standard coming in all sorts of varieties. Then the race to the bottom began when personal computers started to become increasingly common in homes across the globe with manufacturers trying to release less expensive keyboards for consumers. For typing enthusiasts this was a dark time, mushy and lifeless rubber dome keyboards became the new standard to this day. While mechanical keyboards never fully disappeared, they really didn’t begin to make a comeback until 2007 when Cherry, a famous mechanical switch and keyboard manufacturer based in Germany released* one of the most popular mechanical switch designs to date. The Cherry MX Blue “clicky” switch. From this new switch a plethora of mechanical keyboards began to hit the market. Fast forward nearly 10 years later back to 2016. (*Vintage versions of the switch may date back into the late 1980s but the switch was made popular again in 2007.)

In my search for that perfect keyboard I have amassed a rather large collection. Between myself and my colleagues we’ve tried many different keyboards. Here are just some of the models we have on hand:

I’ve also assembled a few keyboards by hand from the ground up, running a fully customizable open source firmware called TMK. To the right is a picture of the insides of my most elaborate build and lacking a PCB it gets quite interesting to wire everything without total chaos.

These are 87 switches and diodes, 89 green LEDs, some resistors, wire, and Teensy 2.0 controller all hand soldered.

My latest build took a different approach using magnet wire. This board is much simpler without any LEDs, but is using vintage SMK Monterey Blue switches from 1992 that are sadly no longer manufactured.

The use of magnet wire is not as clean looking, but it is far easier to work with.

Having such a diverse selection of keyboards to evaluate and having built keyboards from scratch, it gave us a great idea of what we wanted in our own Plugable brand keyboards.

During our design phase, with so many new Cherry MX style mechanical switches saturating the market in 2016 from manufacturers such as Gateron, Greetech, ET9, Kailh, and many others, we evaluated a large variety to decide what switch we felt had the best combination of tactility and pleasing sound. 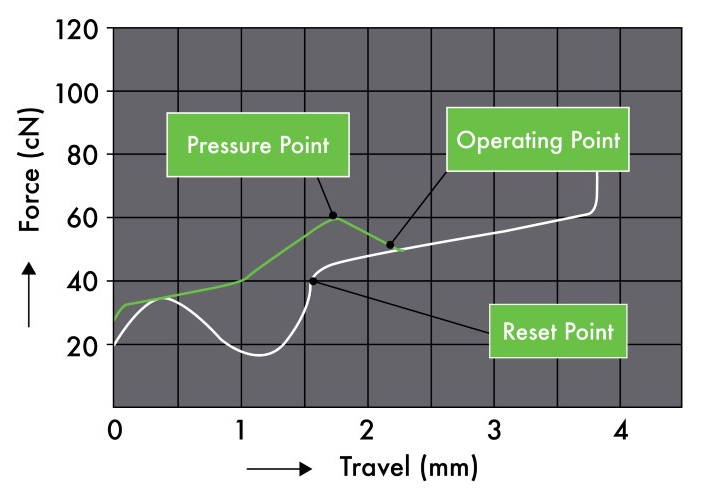 Gaote, a relatively well known switch manufacturer provided us with their Outemu Blue switch, a high quality clone of the now classic Cherry MX Blue clicky switch that can be found at the heart of our two new products. While these switches may not be for everyone, especially those in a quiet office environment, our blind testing showed these switches were favored over the other samples we had evaluated. Diving into the technical specifications, the Gaote PG150 Series Outemu Blue switches used in these two models provide a slightly more pronounced tactile “bump” and crisper audible click than original Cherry MX Blue switches and are rated for 50 million actuations and require 60±15 cN of force with 4.0±0.2mm of keystroke travel.

In addition to the switches and how they feel, we focused heavily on the ergonomic aspects of the keyboards. Inexpensive rubber dome switch keyboards often have a flat profile where all of the keys are the same height and shape, which is great for keeping a thin and low profile, but is not very comfortable to type on for long sessions. Our keyboards feature keycaps with an ergonomic sculpted OEM (standard) profile to provide a gentle sloped arc preventing hand fatigue and offer a more natural typing position. Flip out rear feet can elevate the keyboard about 1/2 inch for a more relaxed typing position and the feet also have rubber pads to prevent the keyboard from slipping.

By now you can tell that we’ve obsessed over nearly every detail. We hope that whether you are already a mechanical keyboard enthusiast looking for an additional keyboard, or curious about purchasing a mechanical keyboard for the first time that you will consider ours. As enthusiasts we feel that our new keyboards are a fantastic blend of features at a price where nearly anyone can afford try one out!

For even more information about the keyboards see their product pages, USB-MECH87BW and USB-MECH104BW and let us know what you think by commenting below! GET A TACTICAL EDGE WITH THE PLUGABLE PERFORMANCE ONYX GAMING HEADSET Game and Stream with the Plugable Performance NIX Capture Card