Click below to see the Plugable storefront for your preferred e-tailer.

We also offer international sales to other regions through Amazon Global on Amazon.com as well as our eBay storefront.

Additional channels for resellers are:

Get Notified About Headset News

Over-ear headphones that isolate you from the world around you and immerse you in high-quality stereo audio fed directly through a flexible 3.5mm audio connection system.

Sold out
Where To Buy

For years gaming peripheral makers have been touting both virtual and "true" surround sound in headphones and headsets. The reality is that a well-designed stereo implementation puts both of these marketing ploys to shame. Modern games have fantastic stereo sound design that accurately positions audio elements in your game environment using advanced binaural audio techniques, and the Plugable Performance HS53's 53mm drivers reproduce the developer's original vision for the audio with accuracy and clarity. Learn more about stereo vs headphone surround sound here. 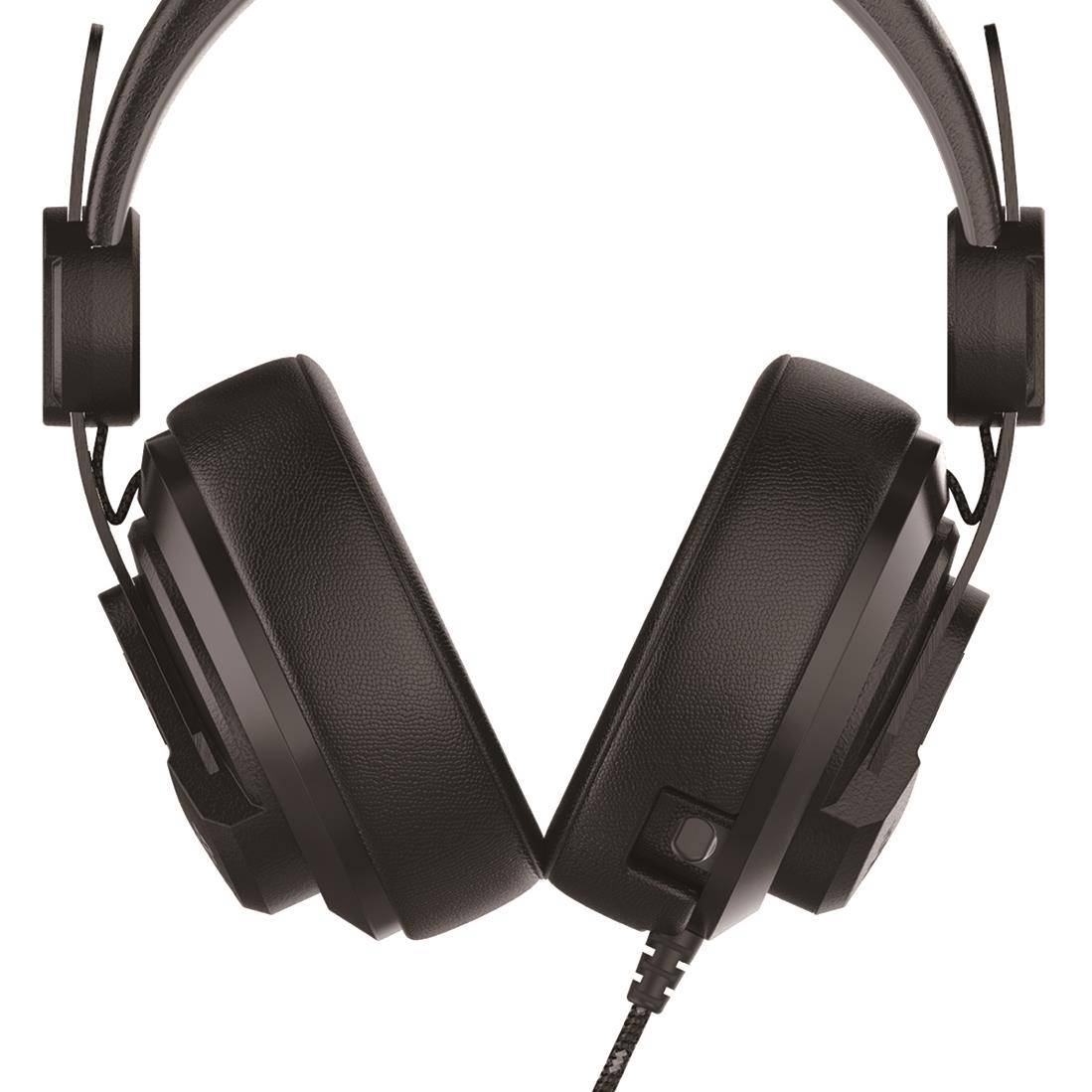 Comfort. Forget that you're even wearing audio gear.

Wide over-ear earcups with memory foam padding, a light-weight but solid build, and a sound signature that avoids fatigue make this a headset you can wear for those extended gaming sessions with your friends. The padded headband is adjustable to fit both larger and smaller heads, and the earcups leave enough depth for most ears to fit inside without touching the grill that covers the audio driver. Finally, the seal created by the earcup pads to isolate sound doesn't cause excess heat build-up, keeping your ears cool and comfortable. 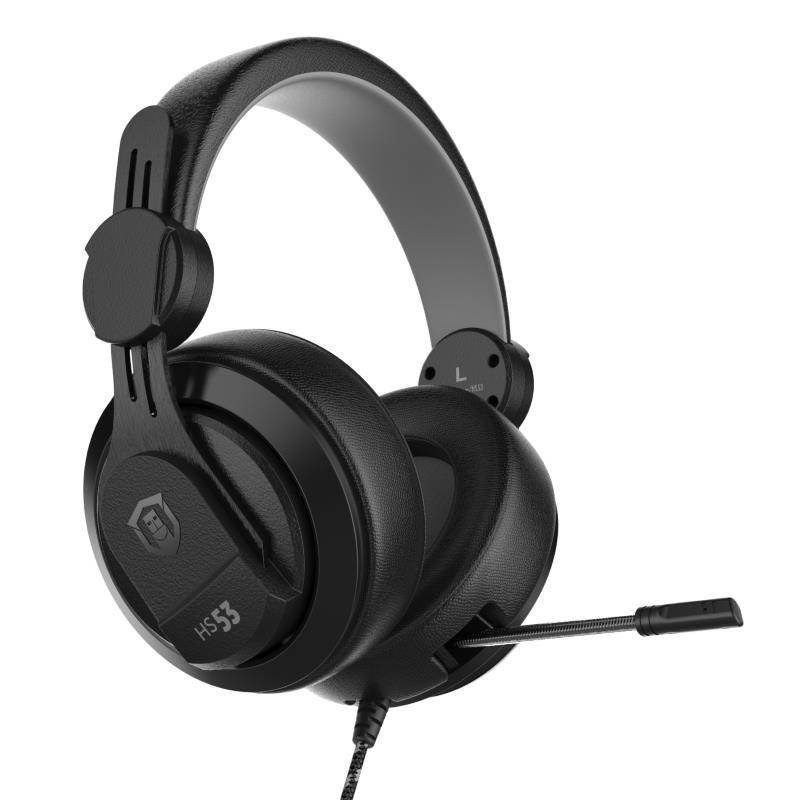 3.5mm audio jacks have been around since the 1950s and are still widely used in today's hardware. From the headset itself you get a 3.5mm TRRS connection for the microphone and headphones channels that is present on phones, tablets, DualShock® 4, and Xbox® One controllers, as well as on the Nintendo® Switch console. An optional cable with in-line volume and microphone mute switch also acts as an extension cable. Finally, a lengthy 3.5mm TRRS to 2x 3.5 TRS Y-cable is included to connect PCs, no matter where your rig is placed. The headphones themselves are easy to drive with low power requirements and won't require a dedicated amp. 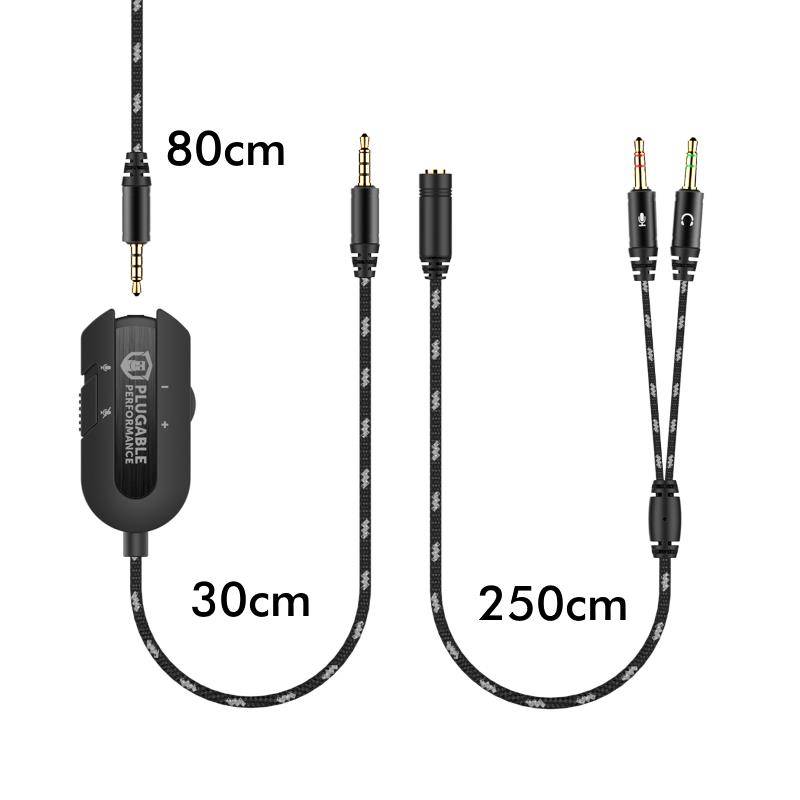 Quality Throughout. Without breaking the bank.

The Plugable Performance team is a group of dedicated gamers, and as gamers ourselves, we've experienced what happens when manufacturers skimp on various aspects of build quality. The HS53 features premium plastics that are sturdy but help to keep the weight and comfort balanced. It features high-quality synthetic leather and cloth for contact points, sturdy brushed aluminum framing for adjustment hinges, and punchy dynamic audio drivers that reproduce sound as the designer intended. The microphone won't leave your teammates straining to hear you, and you can rely on it staying exactly where you position it. 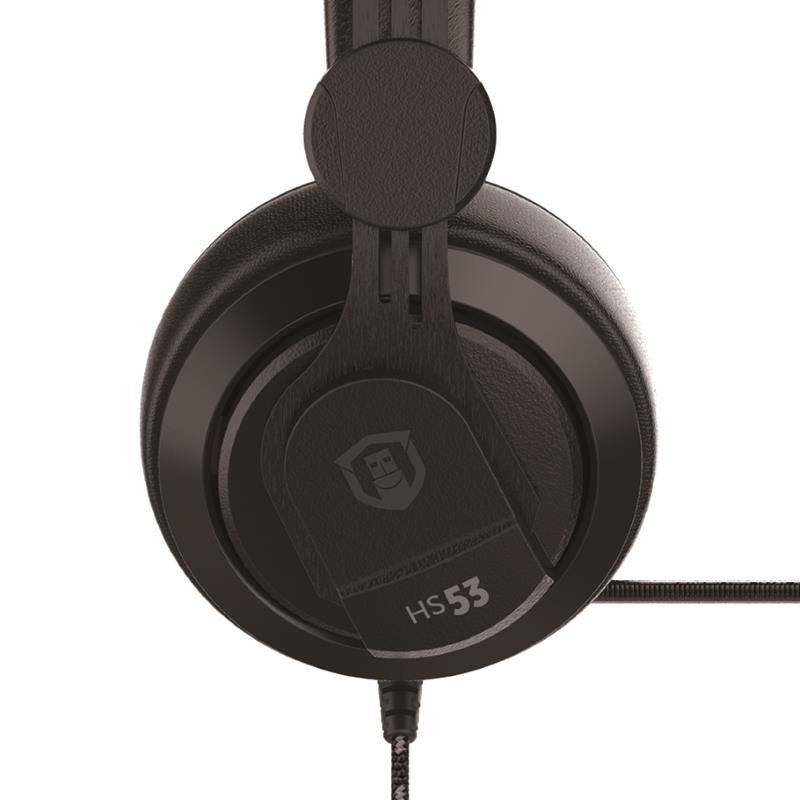 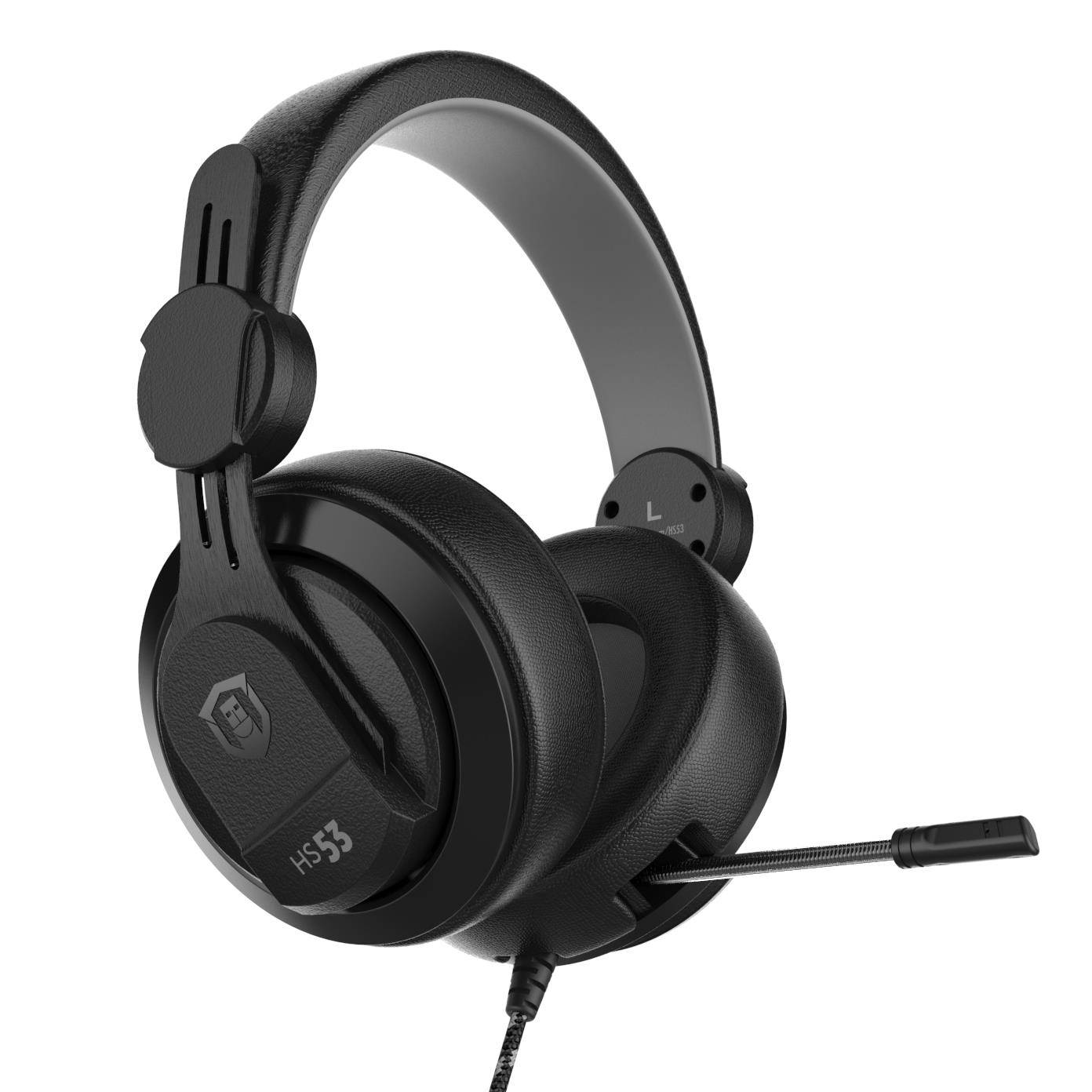 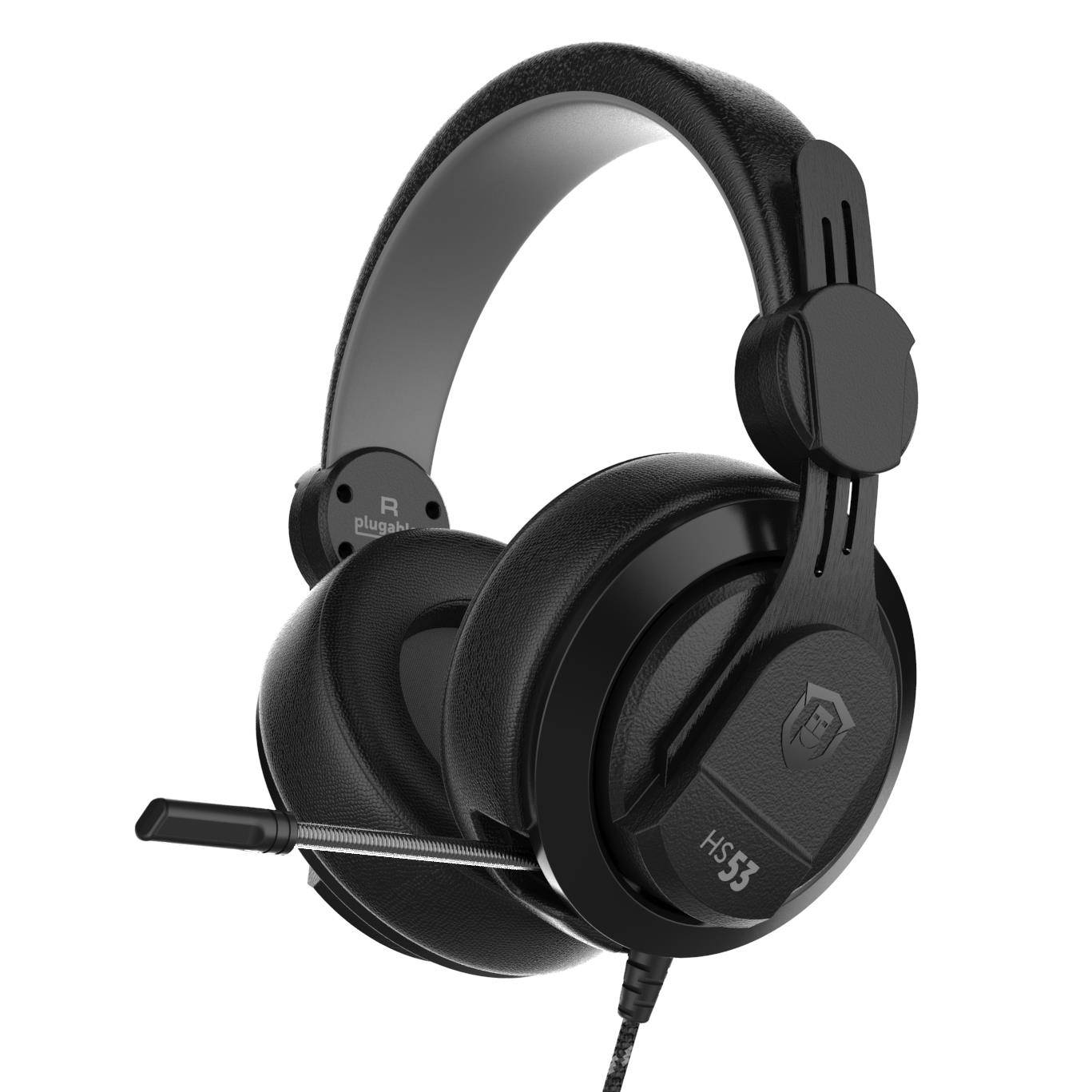 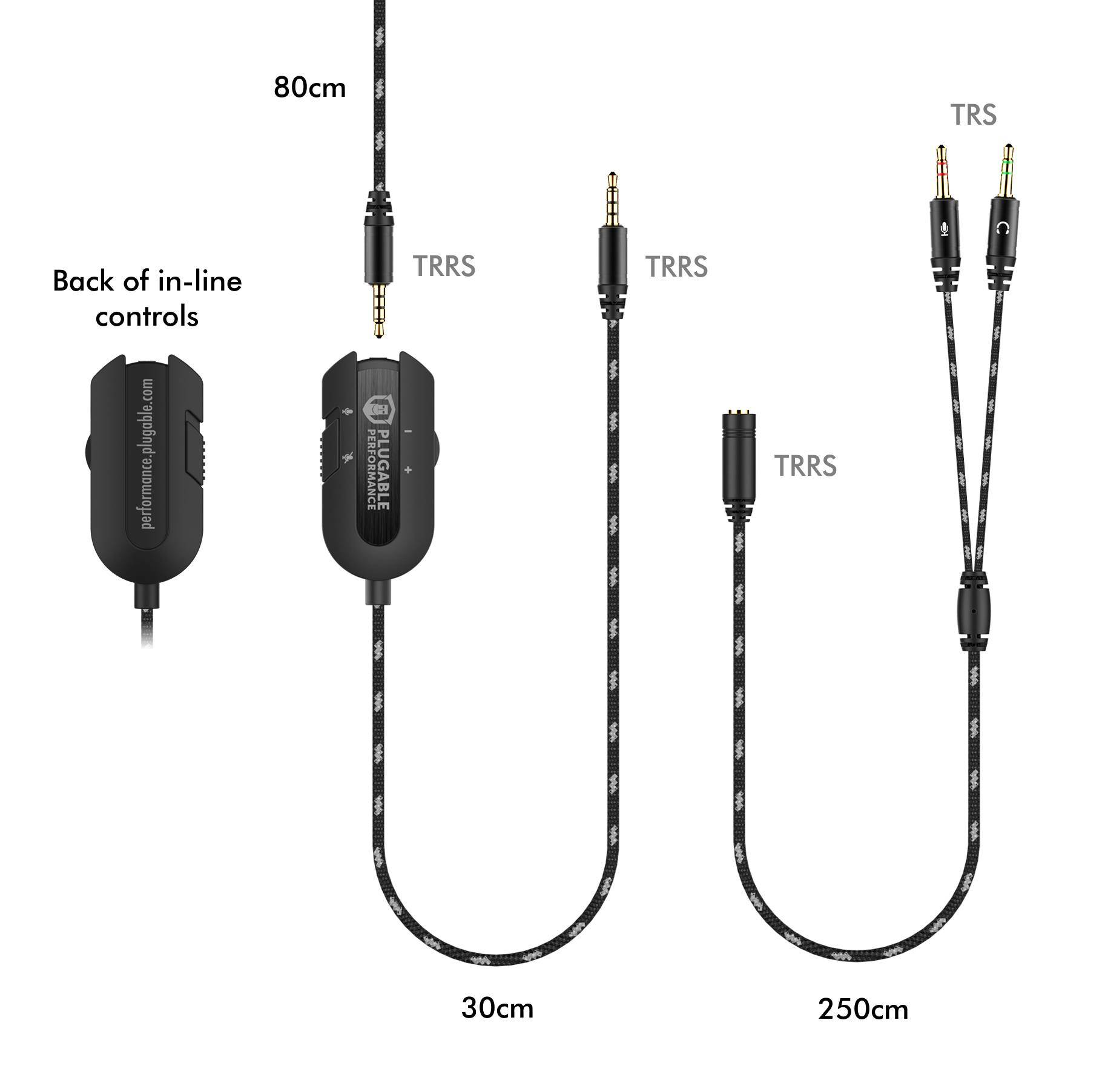 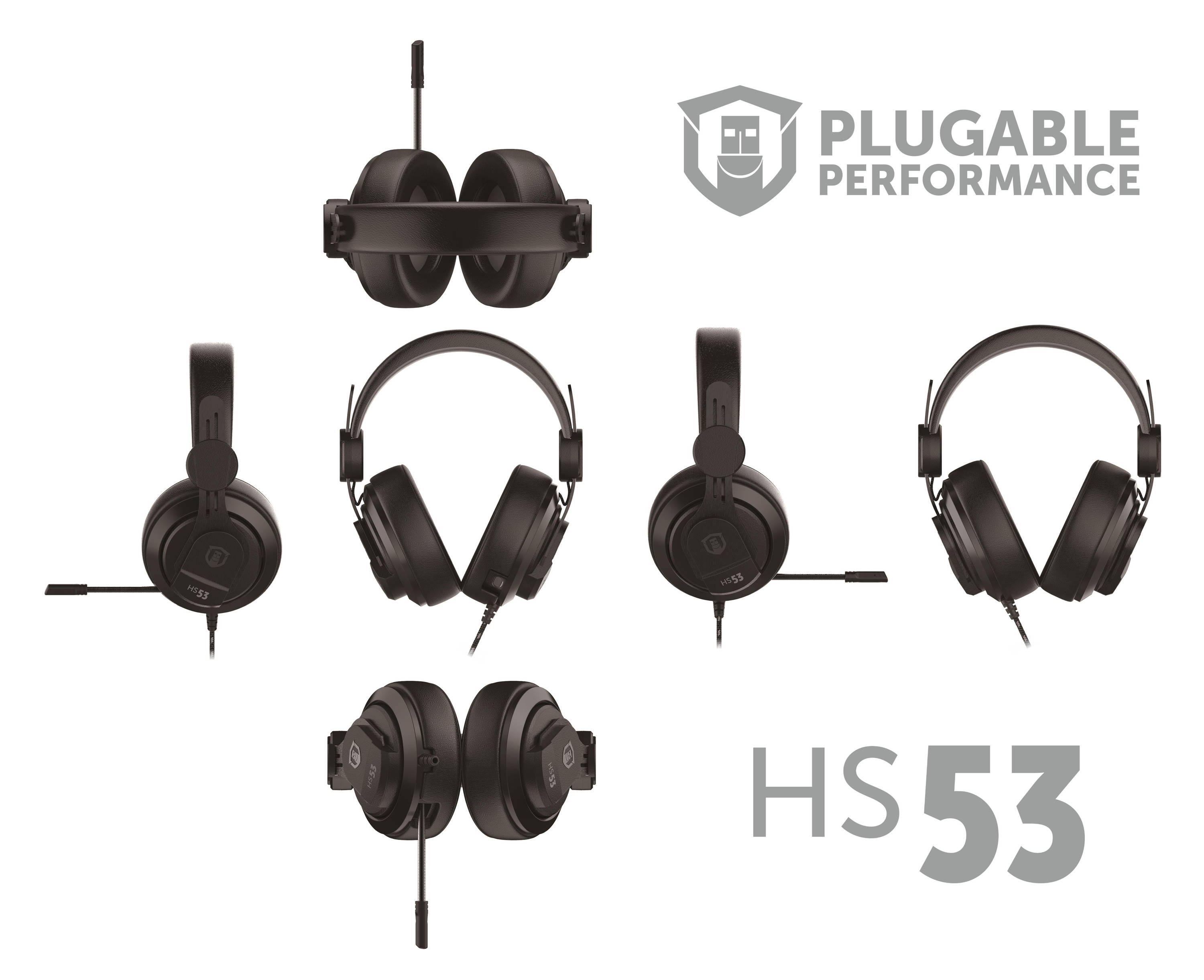 My microphone or headphones don't seem to work. What should I do?

How do I set the HS53 as my recording device on my computer?

Windows — On the bottom right of your screen, right click the speaker/volume icon in the task bar and click “Recording devices” (or “Adjust Audio Properties” for Windows XP) in the drop down menu. In the window that appears, click on the microphone option for your aound device and click the “Set Default” button at the bottom of that same window.

OS X / macOS — Click the “System Preferences” icon on the dock or in Launchpad. Click on “Sound” or the speaker icon . Then click “input” and select your audio input device from the list of sound input devices.

I still prefer virtual surround sound. Can I still get it?

On Windows 10 there are a couple of options for getting virtual surround sound. In your audio device properties, a tab for 'Spatial sound' will allow you to use either Windows Sonic for Headphones, or Dolby Atmos for Headphones. These options are also available on Xbox One. Dolby Atmos for Headphones requires the purchase of a license through the Microsoft Store, while Windows Sonic is free. Depending on what on-board audio you have with your PC, you may have access to additional virtual surround sound options as well.

When live recording/broadcasting audio and video, I notice a little delay while using the HS53. Why is that?

This is not a problem with the HS53 itself. Many modern audio devices sit on the USB bus of your system, and all USB devices have some amount of delay. The additional step or hop of your CPU processing the already processed analog to digital conversion causes a little delay. To accommodate this delay you need to adjust your audio feed in your recording software by about half a second. Manual fine tuning is necessary for expected results.

Does this headset perform noise cancelling or isolation?

The headset is sound isolating, which is to say it forms a seal around the ear and reduces the amount of sound outside the headset reaching your ears.

Can this microphone be used for Skype, FaceTime, Hangouts, or other types of video calls? Screenshot from Battlefield 4 showing a red crecent with an arrow to identify the direction of incoming damage to the player.

There are a lot of aspects to gaming that depend on accuracy, clarity, and reliable feedback. The precision of your mouse movement to lock crosshairs on an opponent, the ability to see fast and subtle movements across the battlefield on your monitor, and keystrokes registering your every command, all play a vital role in making gameplay enjoyable and competitive.

For many years, games included HUD elements that could give you visual cues to where your opponents were. From on-screen radars and minimaps, to highlighting the edges of your screen to indicate the direction of incoming fire. By representing these aspects visually, gamers could get by with basic audio.

When it comes to competitive play, games focusing on realism, advancements in audio technology, and an industry tendency toward minimizing on-screen elements that distract from the game world has led to a reduction in visual cues and greater emphasis being placed on audio. There are a lot of layers to a good audio experience to make the most of what game designers have included in modern games. In this article we'll discuss current audio technology in games, what elements are important to a good audio experience, as well as what can cause frustrating audio issues that can leave you at a competitive disadvantage.

Screenshot from Battlefield 4 showing a red crecent with an arrow to identify the direction of incoming damage to the player.

The Subtleties of Sound

Unless you're an audiophile or an audio engineer, you probably don't think about the intricacies of how sound travels from its source to a listener. However, these intricacies are hugely important if you want to reproduce sound in a way that is realistic and accurate to a listener. These details can mean the difference between you hearing a gunshot somewhere to your left, to hearing that the shot is actually a little behind you and to the left, about how far away it is from your current position, and what particular weapon was fired.

What can make this difference so drastic? What factors are involved?

The biggest difference can be attributed to whether or not psychoacoustics are taken into account. This is the difference between a game engine merely playing a sound in the left channel, and doing a full simulation of how sound moves through an environment. Simulating the environment can mean factoring in objects that sound would bounce off of, such as walls, floors, trees, the surface of water, or even the head, shoulders, and torso of the listener. By emulating the traversal of sound from its source, subtle cues such as the fraction of a second a sound might hit one ear versus the other, or the time it takes sound to reach your character versus a projectile hurtling toward you, can give you accurate awareness of your in-game world. Binaural — Literally means "having or relating to two ears." Essentially this is stereo audio, but directly passed to the intended ear rather than filling a room through loud speakers which usually results in cross-talk between the left and right channels.

One way that spatial awareness can be represented is through the use of a surround sound system. Surround sound usually involves 5 or more speakers and a subwoofer. Usually the basic 5.1 audio configuration will involve having a center speaker in front of the listener, a front-left, a front-right, rear-left, and rear-right channel. While this can allow more audio source positions to be represented to multiple listeners, there are still several factors that limit this setup. The physical distances from a listener and each speaker need to be taken into account, it takes a up a lot of physical space, sound waves will end up crossing over each other and refracting in different ways, and the design of a room even plays a role in how well the speakers perform. Together this can all make such a configuration quite expensive and impractical.

With headphones, things get a lot more interesting. There are fewer environmental issues to contend with, and there's a lot more predictability with how a listener will perceive audio. Given that humans only have two ears, realistic spatial effects can be achieved with only two speakers providing they're right next to or inside the ear, the trick is how audio is presented to each ear through those two speakers. Binaural audio is only realistically acheived when using headphones or earphones. Environmental factors, such as a person's left and right ear receiving both the left and right channels of audio when heard in an open room, make this effect extremely difficult from regular loudspeakers.

Virtual 5.1 & 7.1 — Nearly all virtual 5.1 and 7.1 headphones will either connect directly via USB or will have a USB adapter. The USB solution either makes it so that a software package, or the adapter itself, can process and alter audio being passed to the headphone drivers. Generally these solutions will try to add a sense of 'openness' to the sound, as though audio is coming from a larger environment than the headphones themselves. However, for a well-designed binaural audio implementation in a game, this processing ends up being stacked on top of audio that is already providing an accurate sound simulation and ends up creating a worse experience for gamers.

There are a couple of reasons that this ends up creating a worse experience. For one, often times virtual surround sound implementations don't actually get a 5.1- or 7.1-channel signal from the game in the first place and only appear to the computer as a stereo device. Another issue is that the simulation of a larger environment can make all sound seem as though it is further away and less discernable than it would be if it weren't being processed at all. Discrete 5.1 & 7.1 — There are a couple models of gaming headsets that do discrete surround sound in headphones. That is to say, they include an array of drivers in each ear cup to represent each channel of audio that would exist in a surround sound set of loudspeakers. However, audio physics that are already constrained by the form factor of a headphone are further constrained by the size of these smaller driver units in this design. This usually leads to an array of poor-performing drivers, rather than a pair of higher quality drivers. Additionally, the additional physical hardware drives up the cost of the headphones, and the need to provide power to all the additional driver units usually results in a requirement for a dedicated external audio device to power them.